Three cooking challenges in three months - we're doing really well this year! This one was a tough one too. We set ourselves the challenge of filled pasta, which actually involves a lot more thought than I first imagined.

First we had to decide on the form of pasta and the dough recipe, then we had to think of the filling, and finally decide on a sauce/accompaniment to serve with. A lot of elements to consider.

We both went for ravioli as you can see - mine is pictured on the left above, and my mum's is on the right.

I've broken the process down into stages below with some recipes too if you'd like to try it yourself.

STAGE ONE: THE PASTA

I had never made pasta before (nor had my mum) so this was an exciting one for me. I always had visions of it being really difficult, making a lot of mess and needing a lot of space, but thankfully none of the above turned out to be true!

I didn't want to stick with just plain egg pasta dough so I decided to make two different batches of pasta - one with parsley & one coloured with beetroot - both of which filled me with more pleasure than balls of dough should.

For the parsley pasta I used the "advanced" mixing method of forming the dough directly on work surface by cracking the eggs into a well made in the flour. I felt like a pro! I wasn't quite as adventurous with the beetroot one (mostly because I didn't want to stain the whole kitchen pink) so opted for the food processor approach with that one. 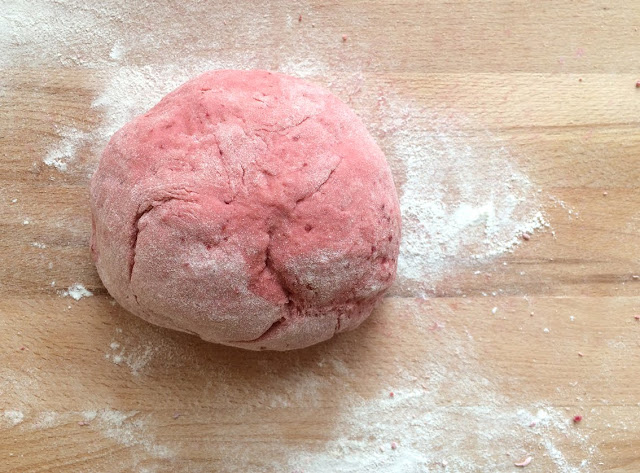 The recipes I used were as follows...

Each of these makes about 450g of pasta.

Place your flour on the work surface and make a well in the centre.

Crack the eggs into the well and add the oil and extras, e.g the herbs.

Using a fork, beat the mixture in the centre, slowly incorporating the flour. If you're like me, you'll find you might get a bit eager with the fork and break through your flour walls so be on the lookout for egg overflow. As more and more of the flour begins to combine with the egg you'll probably want to abandon the fork in favour of using your hands.

Once the mixture is combined into a solid ball knead the dough for about 10 minutes until it becomes stronger and more elastic. When your dough looks smooth and no longer feels sticky, shape it into a ball and cover with a tea towel/clingfilm to keep it moist.

Then let the dough rest for at least 30 minutes.

When you are ready to use your dough, cut it into quarters so you can work on one piece at a time, while keeping the other pieces covered to prevent them drying out. 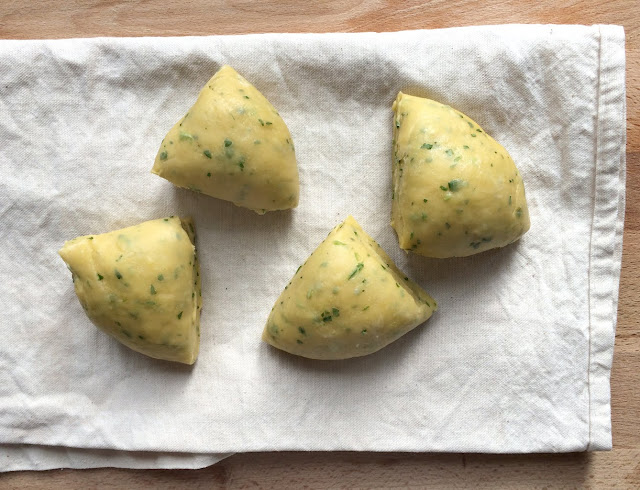 I actually invested in a pasta machine for this project as I had some vouchers I'd been given for my birthday. Beforehand I thought I'd just make my pasta by hand, but decided to treat myself, and I'm very pleased I did!

Because I made two lots of dough I had enough to make some extras on top of my ravioli so I used my pasta maker to roll out the dough and then cut it into tagliatelle & fettuccine. It worked really well, and was a nice added extra for this challenge! I have frozen some of the fresh pasta to eat at a later date too.

Back to the ravioli. The filling I decided to used was taken from this Food 52 recipe and was a combination of parsley, mint, ricotta and goat cheese.

It was just a case of combining all the ingredients in a bowl and then dolloping on the rolled out pasta. I found this whole process very relaxing; rolling out the dough, passing it through the pasta machine until it was thin, and then constructing the ravioli.

I bought myself a round ravioli cutter (I also got a square one for my mum!) so was able to create some nice uniform shapes. They looked really nice I think, and held together well. 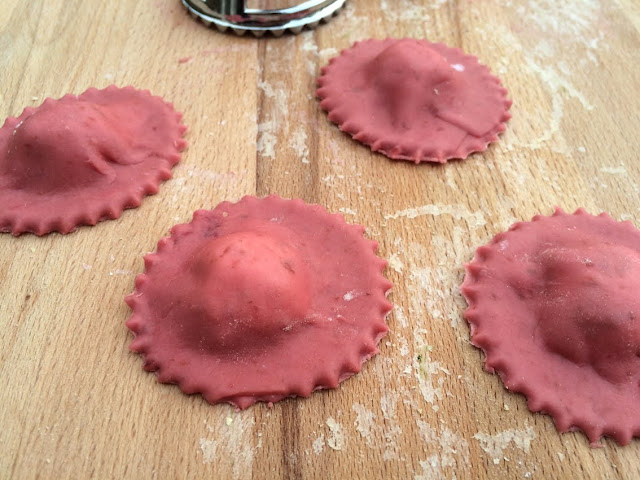 I made my ravioli in the day time while Ben was at work, but couldn't wait to the evening to try them so made myself a small portion of super fresh ones, which I served on a bed of fettuccine with a homemade avocado pesto and load of parmesan. Delicious! And so quick to cook!

It was the first day of the year that it was warm enough for me to eat my lunch in the garden too so that was an added treat. 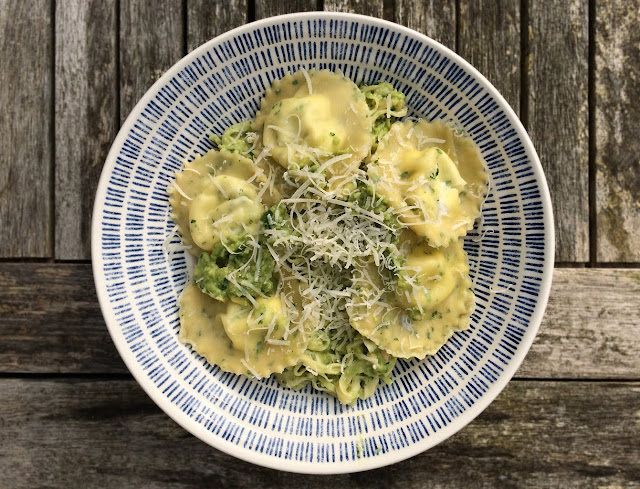 I think the ravioli was best cooked fresh as I wasn't quite sure how to store them once constructed and put them in the fridge, but after a while I think the filling began to seep into the pasta a bit and they got a little sticky. Perhaps I rolled the pasta thinner than I was meant to?

Anyway, there were still some good (non-sticky) ones left for Ben to try when he got home from work. This batch was a mixture of herb and beetroot ones, and I served them on parsley tagliatelle with sauteed asparagus and walnuts in a lemony buttery sauce, using this recipe from Green Valley Kitchen.

It was a nice feast!


My mum made her batch on Easter Monday and she said that she found it pretty challenging one too - apparently there was flour everywhere!

She opted for an egg pasta dough, but tried two different fillings. One which was spinach based, and the other a ricotta one. With no pasta maker available she rolled out her pasta by hand and thinks she may have left it a little thick as she found the ravioli took a while to cook. Look how neat they are though. Like little pillows.

She served it with a pomodoro sauce, although confessed that it came out looking a bit like chutney, which is a little odd. Good to see a healthy helping of parmesan too though.

Ben gave me a very respectable 9/10 with one point being deducted by the disappointment of me having to throw some of the super sticky ravioli pieces into the bin. I definitely think I'll be making pasta again though so I'll try and make it when he's not at work next time so we can both enjoy it super fresh!

My dad gave my mum another high score with 8/10, possibly with a couple of marks being deducted due to the thickness of the pasta. I did have the advantage of having a pasta machine so I would bump that up to a 9 too I think.

Another pretty good round! This challenge is really improving our skills. 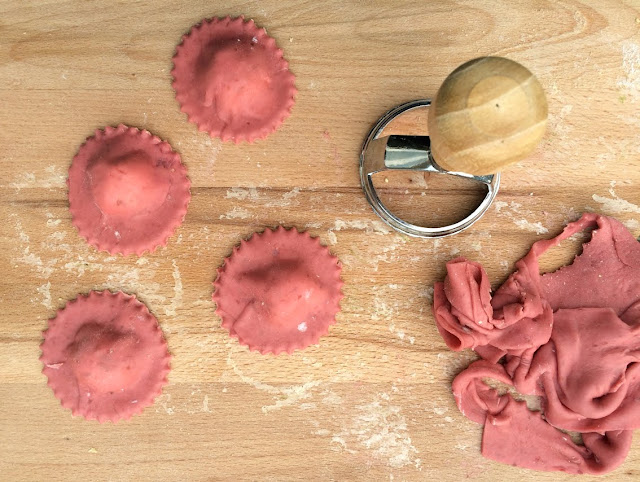 My mum has requested an easier challenge next time (not involving dough) so we have opted for swiss rolls or roulades. I've already started pinning some recipe inspiration.

The thought of them is making my mouth water already. 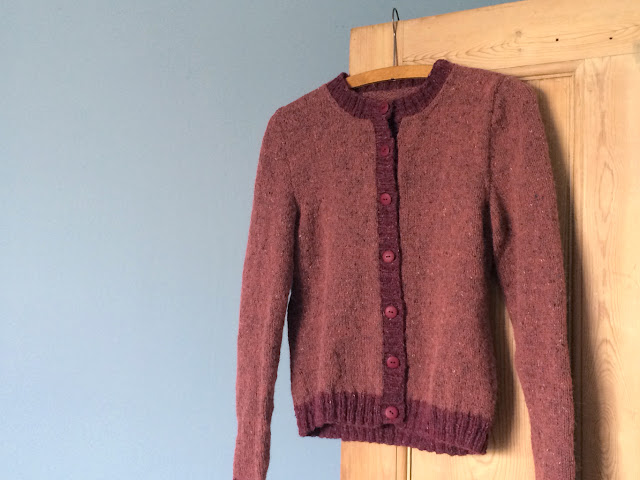 My felted tweed cardigan is finally finished. Doesn't it look grand? I really like the contrast trim and it fits really nicely, so a success all round I'd say.

It took me a little longer than my original Christmas deadline, but that is partly because I got caught up knitting a jumper for a small dog so I'll let myself off the hook.

The pattern is from this Rowan Loves brochure which has a few knitting patterns that I really want to make. And they use really nice yarns too!

I actually took the plunge and invested in the Rowan Felted tweed yarn the pattern recommends, rather than taking my usual (thriftier) approach of substituting for different (cheaper) wool.

I think in the past I have doubted my knitting skills a bit more and worried about buying quality yarn and then wasting it by making a badly fitting cardigan I wouldn't wear, but I have confidence in my abilities now so I'm going to try not to hold back. 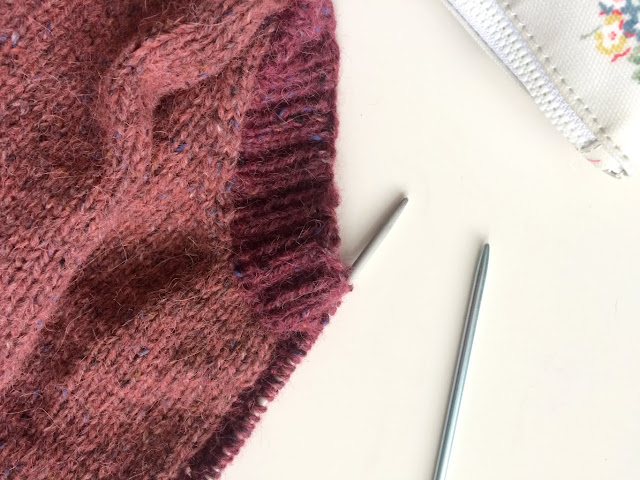 I also learnt a new skill whilst making this garment, the pick up stitches method for adding on a button band. With previous cardigans I have always knitted the button bands as separate pieces and sewn them on, but am pleased with the pick up and knit method as the end result seems much neater, and it means I can avoid some of the dreaded sewing up.

It's nice to have learnt a new technique too!

The pattern for this cardigan also has a few variations, both in sleeve length and neckline, so I may use it again to make a slightly different version. It's nice when you find a reliable pattern you want to make again and again.

But for now, I'm going to make the most out of this one.

In other news, I've already started on my next knitting project: a chunky knit jumper to keep me warm on spring and summer evenings. I'd forgotten quite how quick knitting with chunky yarn can be and I've already made good progress - the front and back are done, and only took a week each. At this rate, maybe I'll have it finished by the end of March. 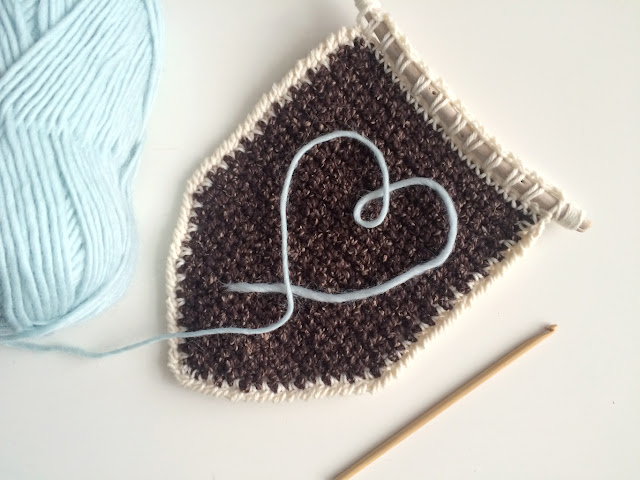 I decided to make Ben a little crochet banner for Valentine's day this year, in his favourite colour: brown!

I didn't have a pattern so just sort of made it up as I went. It turned out to be a fairly quick project, which was lucky as I had to make the whole thing in secret one Saturday while Ben was at work.

I used some nice speckled brown wool which I'd originally bought as an alternative option for the bobble hat I made last summer and added a corded edge in cream. Once I'd finished I crocheted around a stick along the top edge to hang the banner.

It ended up looking just as expected, which was a nice surprise. 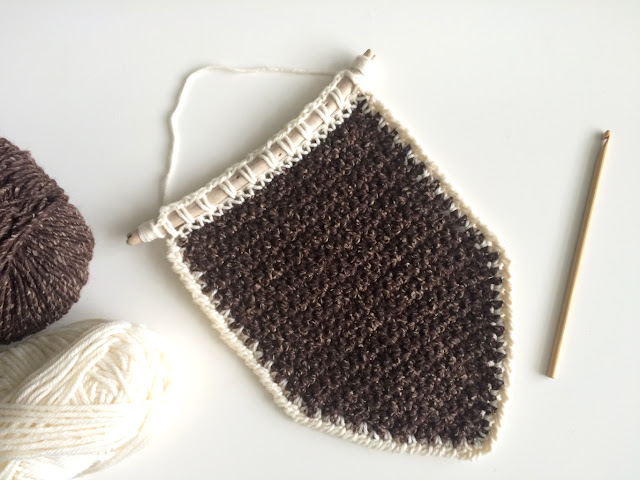 I debated whether to embroider or add a felted design, but in the end opted to crochet on a heart shape using a series of slip stitches. The end result looked nicely wonky I think. 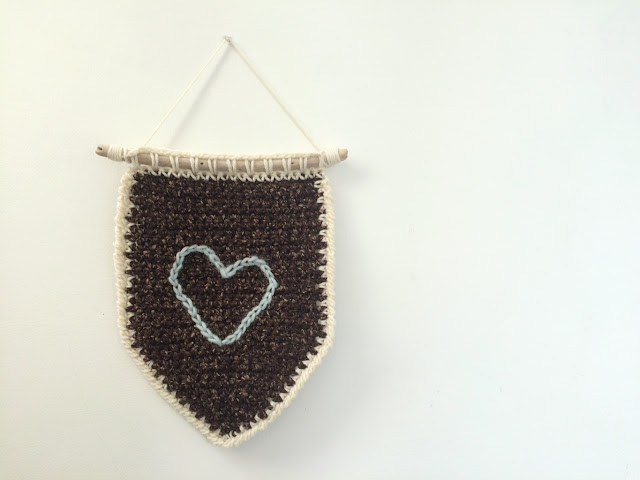 And Ben said it was lovely so I was very pleased.
In return he made me probably the best card ever. So good! 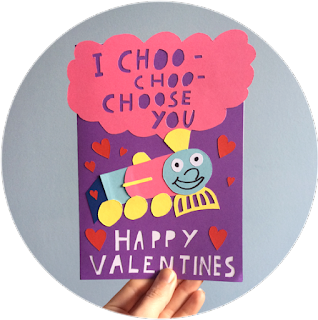