This time the cooking challenge is dedicated to gnocchi. A bit of a technical one.

My mum made Gnocchi di Romagna (pictured left) which are ricotta and flour-based gnocchi, and I made a sweet potato version (pictured right).

I found this one quite tricky - partly because I wasn't exactly sure on the consistency I was aiming for with the gnocchi. It's not something I've eaten much of, and when I have eaten some it has rarely been homemade.

I chose this recipe from the Just a taste website as I liked the simplicity of the ingredients, but with the slight twist on traditional gnocchi. 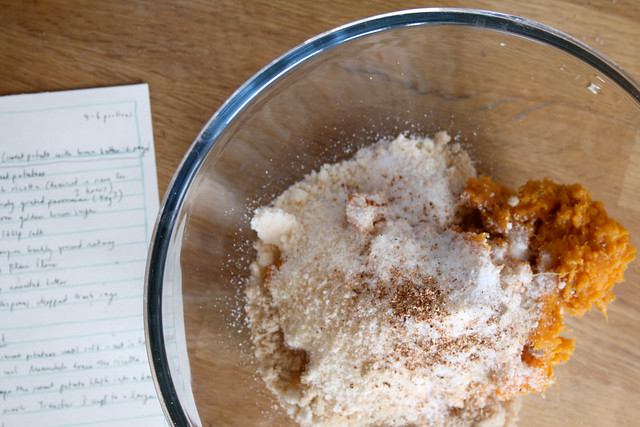 It took quite a while to make but a lot of that time is spent draining the ricotta, and baking and cooling the potatoes so it's not all full-on cooking time.

I found that I needed much more flour than the recipe said to make the mixture into a manageable dough - perhaps because I didn't drain the ricotta enough - but once it got to a more solid (although very sticky) state I was able to form them into wonky gnocchi shapes. 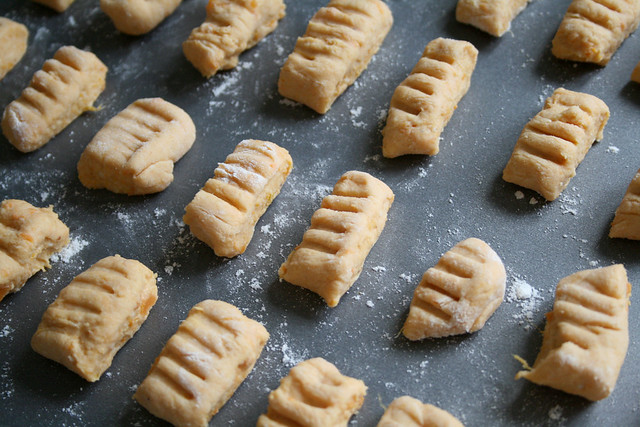 The recipe made enough for 4 people so I froze half the batch at this stage.

A tip: make sure there is enough space in your freezer before you do this, as we had to chip a couple off the top of the freezer drawer a couple of days later (told you they were sticky).

The first batch I cooked on the day of making, and followed the recipe for Kelly's brown butter and sage sauce.

Ben really like this when he tried it, although I have to say, I wasn't that keen on it myself. A bit sage heavy for me. The gnocchi really does soak up the buttery sauce though, which is nice.

I was quite pleased I'd made enough for two batches as it meant I could try something different for round two. This time I made some pesto with some herbs from the garden, and served it with some roasted asparagus and parmesan. 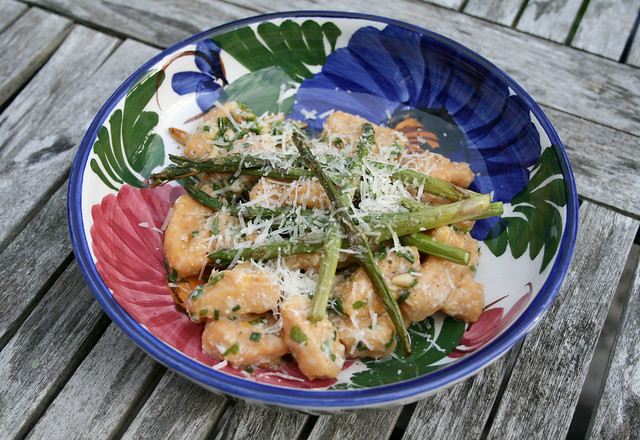 I really liked how this turned out, although I was a bit overzealous with the lemon juice (the gnocchi really did absorb it). I cooked the gnocchi for a little longer the second time too and I think they had a better texture when slightly firmer.

Here's the recipe for the pesto I made if you want to follow it - I've reduced the amount of lemon so you should be safe.

Season well, then stir in the olive oil and lemon juice.

That's it - super easy! Would be great served with gnocchi, pasta, or on a potato salad.

Back to the gnocchi, my mum made her batch yesterday. She followed a recipe from a 1979 Italian cookbook, which didn't include potato. Controversial? Maybe.

She sent me a message halfway through saying that she'd made a sloppy mess and the kitchen was covered in flour, but I think she must have been exaggerating as the finished gnocchi look quite firm in her pictures.

She served them with a simple butter and parmesan dressing. 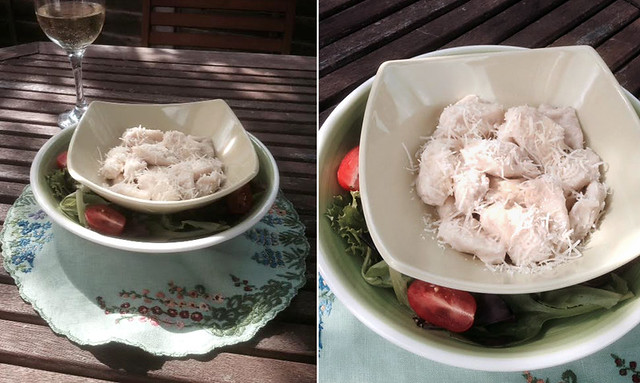 My dad gave my mum a mixed review: he said the taste was ok, but that they were a bit slimy. He gave them 8/10 though so he must have liked them! Good score.

Ben gave me 7.5, which I was happy with as I didn't really enjoy my first dish that much.

Pretty good results all round I'd say, particularly as this was one neither of us were that optimistic about.

Next time we'll be making jam and scones.
Perfect for a summer cream tea!
posted by d e b b i e at 12:14 pm No comments: 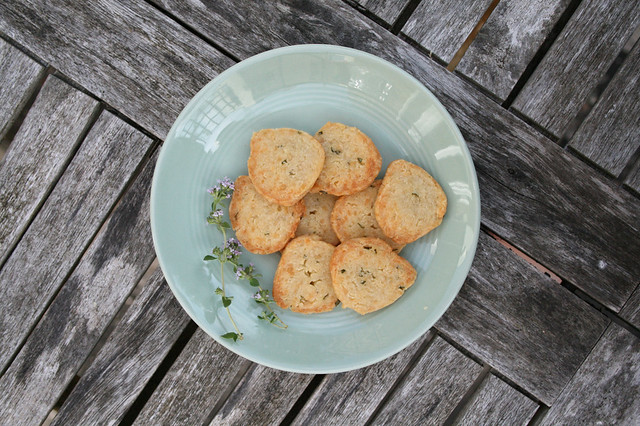 I decided to make some savoury biscuits today, to accompany some post-dinner cheese this evening.

These cheese and thyme mini biscuits were super quick to make with very few ingredients, and the dough can be made in advance and frozen so it would be easy to serve them fresh from the oven when you have guests.

Cheese and thyme mini biscuits
Make approx. 40 (depending on size)

Mix the two types of cheese and butter together in a bowl.

Add the flour, thyme, mustard powder and salt and combine to form a dough.

Roll the dough into a thin log, roughly 2-3cm in diameter. At this point I split the dough in half, so I could freeze some for later.

Wrap the log in cling film and leave to chill in the fridge for around half an hour.

Preheat the oven to 180ºC and line a baking tray with baking parchment (you may need two if you are doing the whole mixture in one batch).

Slice the dough into 5mm thick pieces, place on the baking tray and bake for about 10 minutes, until golden. Transfer to a wire rack to cool - they taste good warm so make sure you try one while they're fresh from the oven!

I think this recipe would also be great with rosemary instead of thyme, or if the mustard powder was substituted for cayenne pepper. Oh, and I might add some poppy seeds next time. 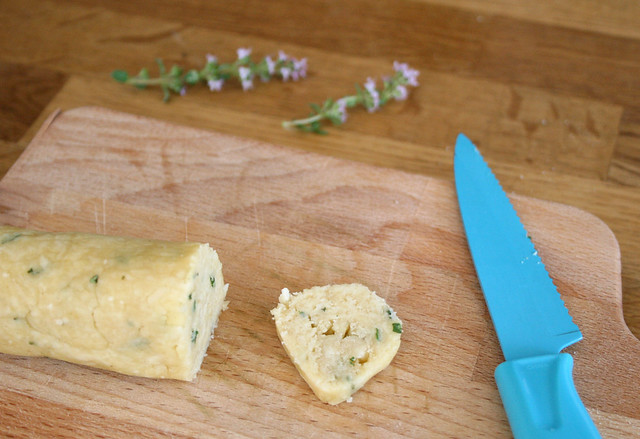 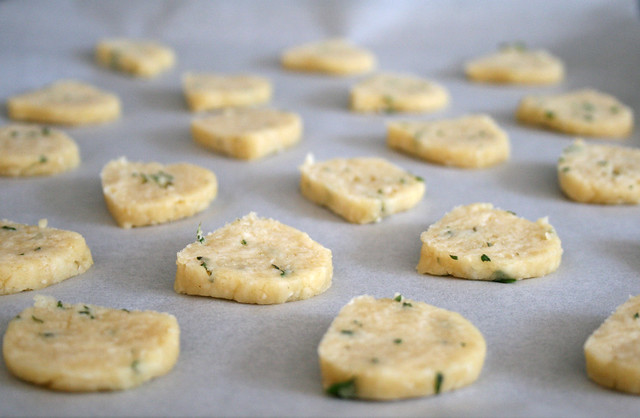 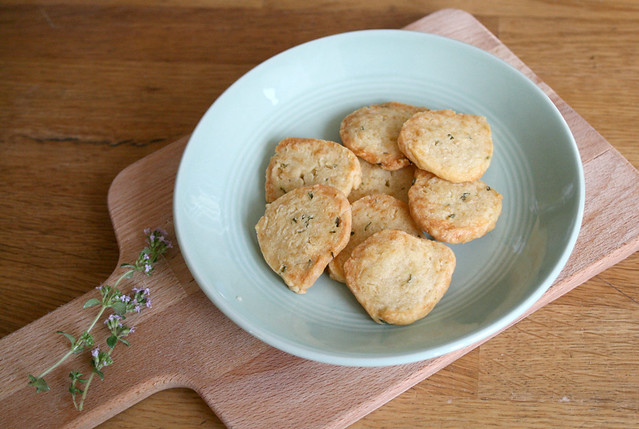 They're really tasty. I'm finding it hard to resist eating them all ahead of dinner.
posted by d e b b i e at 6:18 pm No comments: 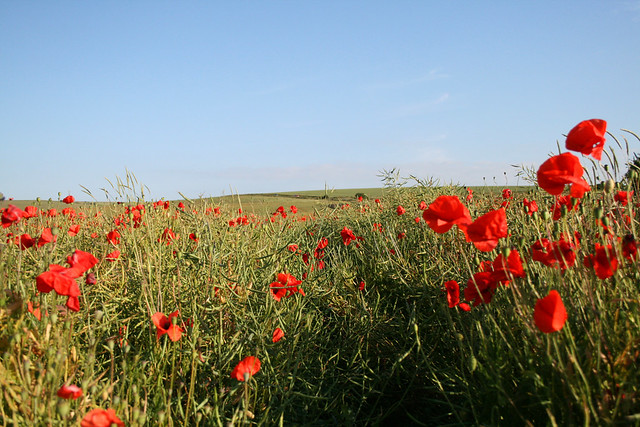 Look at all these poppies! We found them on Tuesday night when we went for a little drive into the South Downs near Falmer.

It's definitely worth popping up there if you live nearby. They look lovely by sunset. 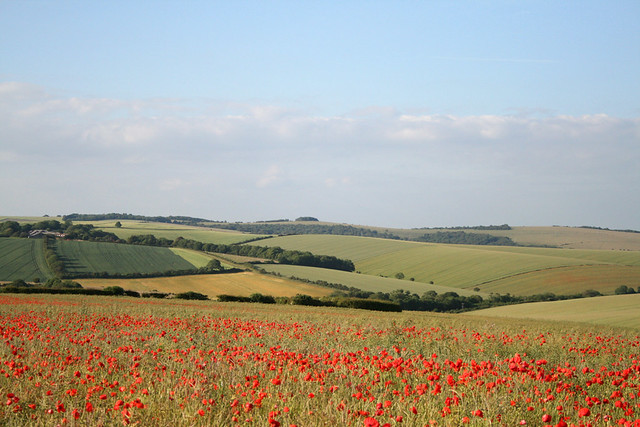 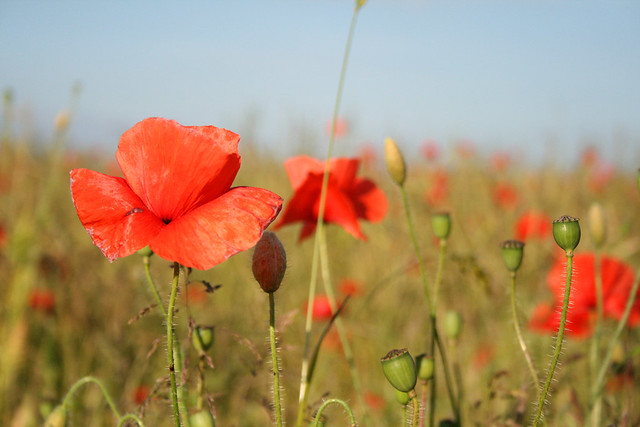 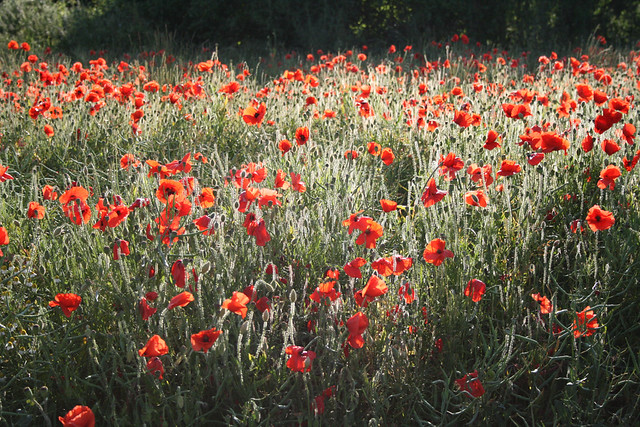 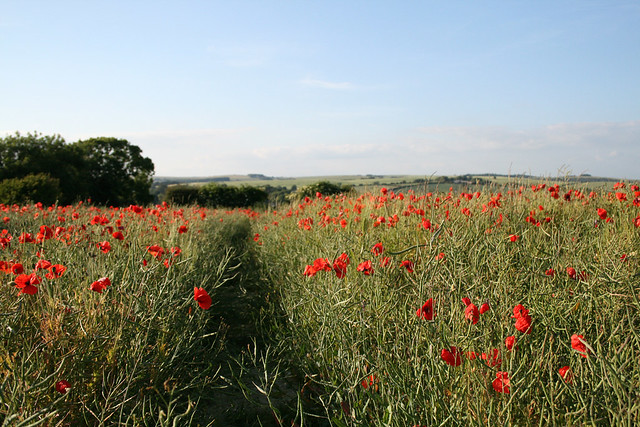 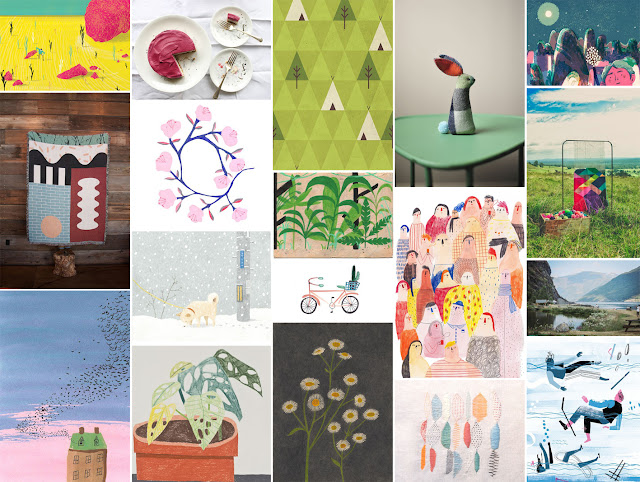 A selection of recent Pinterest favourites.
An eclectic mix.
posted by d e b b i e at 5:45 pm No comments:

Sorry for my absence. I've been spending a lot of time outdoors and have just arrived back from an early summer holiday. My gardening obsession is still in full force though.

Here are some recent botanical based images from our house and garden taken from my Instagram feed. 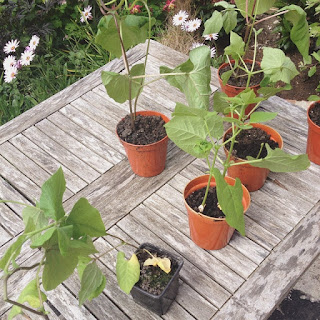 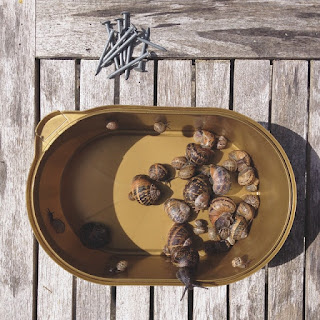 Planting out the beans on Ben's birthday // Pest control - collecting the snails for relocation. 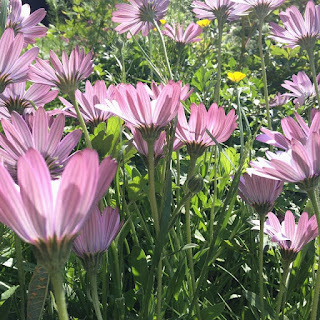 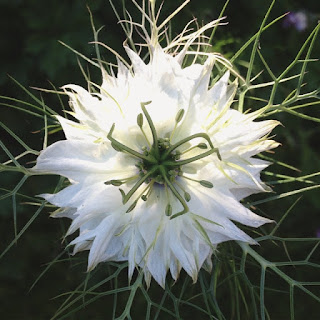 African daisies (Osteospermum). I like their purple undersides // Love in the mist (Nigella) - we have these everywhere! 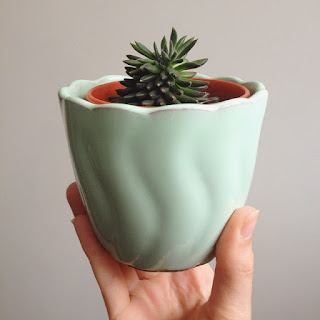 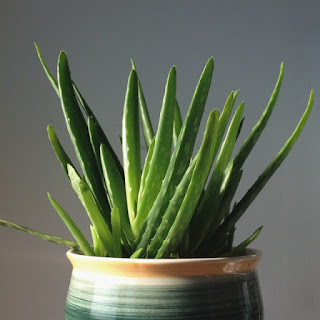 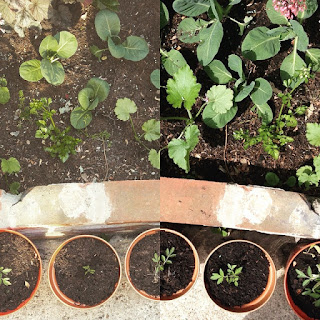 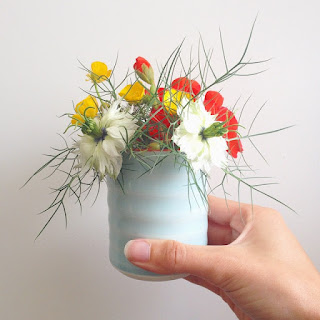 How the garden grows. Our veg patch before and after our holiday // Bringing the garden indoors - a mini bouquet.

Now that we have a lot of things planted outside the garden is looking nice and full. Unfortunately we have already lost our cucumber plants to those pesky snails, but the cabbage, courgettes and beans are growing nicely (despite being a little nibbled). And we have a lot of tomato plants on the go. Four different varieties!

We planted out some more seeds yesterday too. Some wildflowers have been scattered around the garden, and the Cima di Rapa and Cicoria I received in the secret seed swap have been potted and placed in the greenhouse.