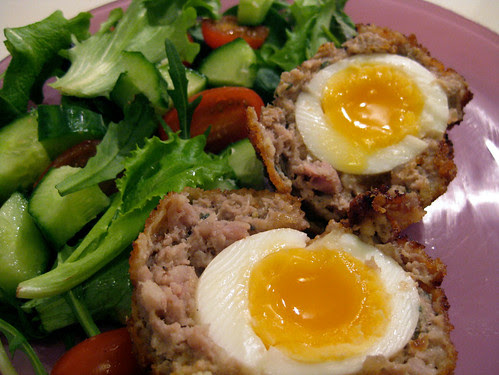 For this month's cook-off challenge I picked scotch eggs. I remember making a scotch egg once before, in year 7 at school, but I'm pretty sure there would have been no hot oil involved that time.

My mum opted out of the deep-fat frying and found a recipe for oven baked scotch eggs, but I thought I'd go for the challenge and based mine on the following recipe from Hugh. (I bought a fire blanket in preparation though for fear that I could have burnt my flat down!)

Make sure the eggs are at room temperature. Bring a large pan of water to the boil, lower in four eggs and simmer for seven minutes. Transfer the pan to the sink and run the cold tap into the pan to stop the cooking. When the eggs are cool enough to handle, peel them.
Add to the sausage meat the sage, mace and cayenne, along with plenty of salt and pepper, and mix well with your hands. Divide into eight equal pieces and shape each piece into a flat patty.
Take two patties and use to encase one egg, moulding the meat smoothly around the egg and making sure it's sealed all over. Repeat with the others.
Pour groundnut oil into a deep-fat fryer or deep, heavy-based pan to a depth of at least 7cm and bring up to 170C (or until a cube of white bread, when dropped in, turns light golden brown in about one minute). Spread the flour on a plate. Beat the remaining egg in a shallow dish. Spread the breadcrumbs on another plate. When the oil is up to temperature, dust each sausagemeat-encased egg in a little flour, then dip it in beaten egg and roll it in breadcrumbs. Lower into the hot oil and fry for eight to 10 minutes, turning from time to time, until deep golden brown all over. Drain on kitchen paper and serve hot, for once. Or cold, later.


I bought a bit less sausage meat than recommended so used medium eggs instead of large, and if I was making them again I would use less/no sage, but that's just personal preference.

For the breadcrumbs I used a mixture of some white bread and some of the sourdough bread I had left over from my bread-making class. 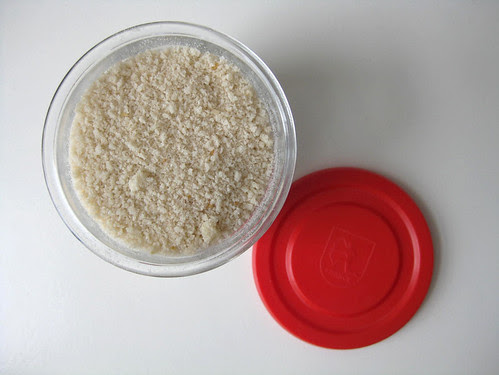 I thought I'd try sprucing up a couple of the eggs so I added some caramelised red onion relish between the egg and the sausage meat. Good for the taste buds, but not so good for the construction as it meant that the sausage meat was harder to seal around the egg. 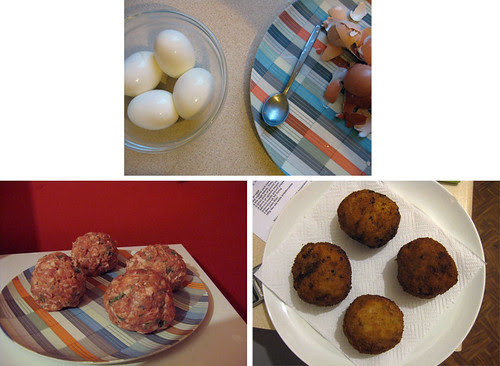 The cooking process went very smoothly though (no oil fires), and they didn't take very long at all.  I decided to eat one egg hot from the pan and was pleasantly surprised to find the egg yolk was still warm and runny - a result I thought it would be tricky to achieve! 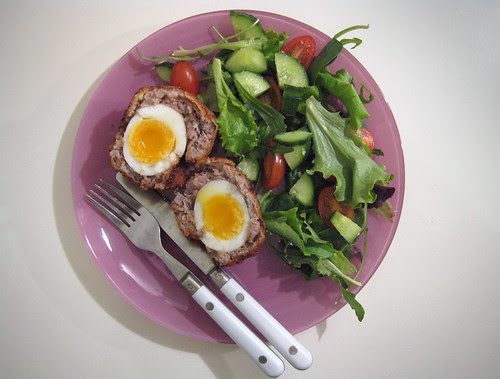 Unfortunately, a warm soft yolk also leads to a cold soft yolk though, which didn't go down so well when I cut an egg up for my parents to taste test yesterday. Oh dear.

If you are after hard-boiled scotch eggs to eat cold later I would add a few minutes of initial boiling time to Hugh's recipe.

I'd say the results were, on the whole, mostly successful though. My dad gave me a 6/10 score (with points deducted for the runny yolk and too much sage). He only gave my mum 1/10 this month. Judging by this photo I'm not surprised though:

It turns out oven-baked scotch eggs are not the way to go!
Next month, Battenberg cake! 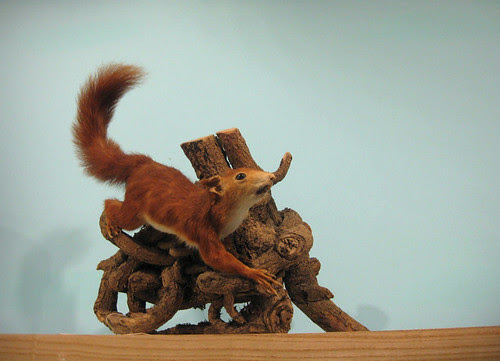 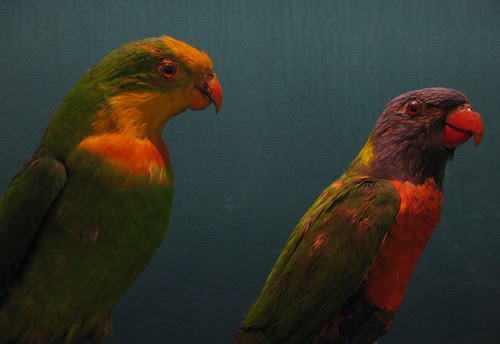 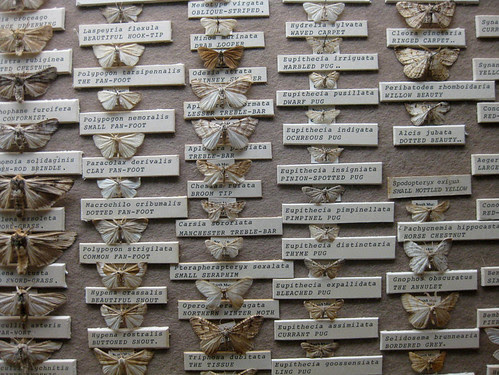 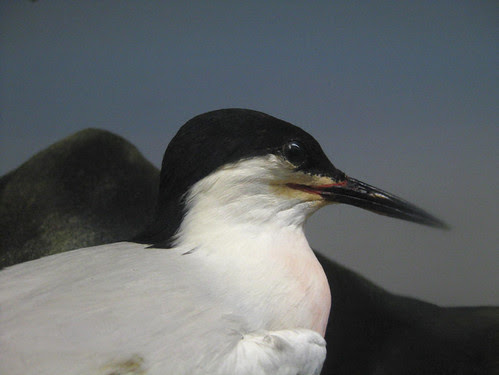 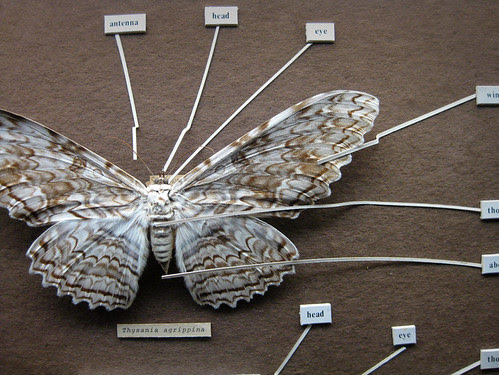 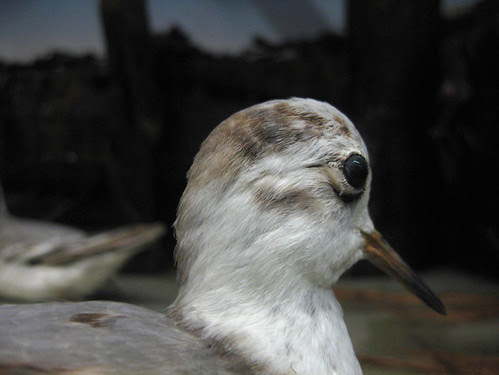 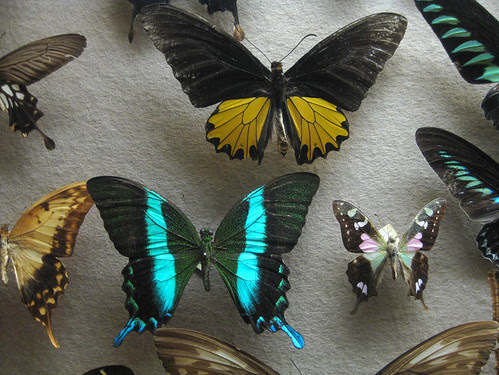 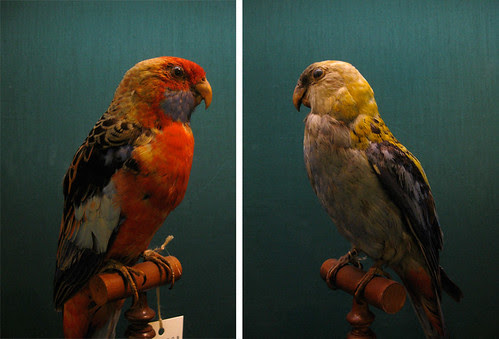 I went on a little outing to the Booth museum yesterday.


Yesterday I went to a bread-making workshop at Real Pâtisserie in Kemp Town. What a treat!

We spent 4 hours mixing, kneading, drinking tea, eating croissants, shaping and baking, and I got to go home at the end with a big bag of fresh warm bread. 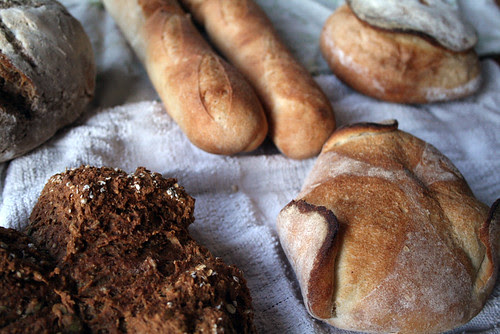 I ended up with 4 loaves and 2 baguettes in total. Clockwise from top-right: Rye sourdough, 2 sourdough baguettes, 2 sourdough loaves (one with a hat and one with ears) and some soda bread with oatmeal and pumpkin, sunflower and sesame seeds. Very tasty.


I would definitely recommend the workshop (and the bakery in general). I could spend all day in there - both the bread and the tarts are very hard to resist. In fact, I fail to resist about 3 times a week. 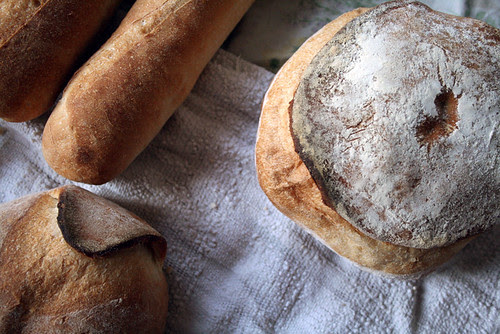 A while ago I started trying out new crochet stitches by making small sample squares of different patterns (the beginnings of a blanket). I found a bit of spare time this week so created a few more squares to add to the collection: 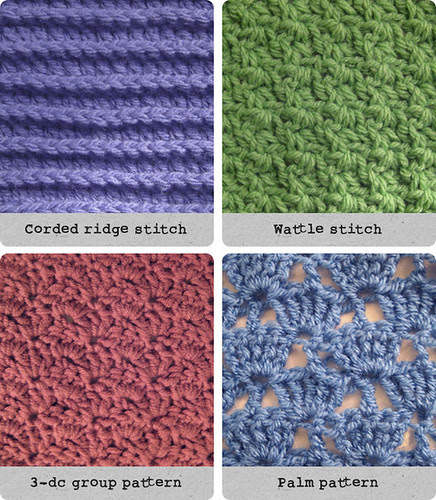 I like the corded ridge stitch the best. Although it is quite heavyweight and managed to take up a lot of wool. It's good to use up some of my huge stash though....

The aim for the next year is to get it down to one basket! 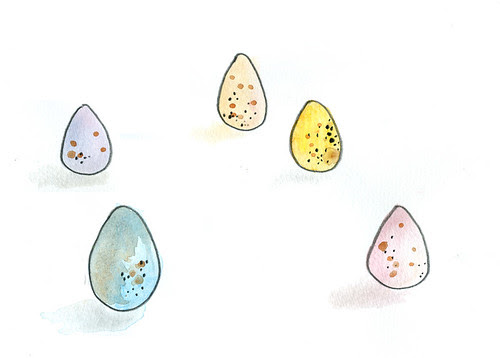 It's far from Easter. In fact, it's not even Lent yet, but I am sure I have already exceeded my annual mini egg quota. I've eaten two bags of the (lovely, tasty) things since Monday.

I'm sure doing an hour of water workout will have worked off a lot of that egg content though...no?

I received a Liebster award from the very lovely Lyndsey a few days ago, which was very kind!

"The aim of the award is to give recognition to exceptional up and coming blogs with less than 200 followers that deserve more readership, and spread the word about them."

Lyndsey has a lovely blog full of crafty and musical treats, and goings-on around Brighton too. It's nice to read a blog from someone so local. I even found a post about the musical offerings from my friends Eleanor and Rachel (have a listen!).

Upon accepting the Liebster Blog Award, you must abide by a few simple rules:

1. Show thanks to the blogger who nominated you for the award by acknowledging them and linking back to them.

2. Reveal which 5 blogs you would like to nominate for the award, and let them know by posting a comment on their blog.

4. Bask in the love from some of the most supportive people on the internet - other artists and writers.

5. And best of all - have fun and spread the karma.


So the blogs I am going to nominate for the same award are as follows:
Go on, take a peek.... 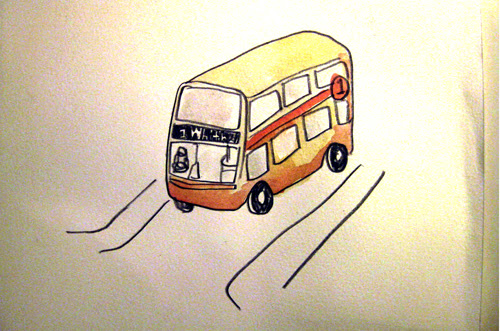 There was a strange vibe at work today. Everybody seemed quite glum - I can't explain why. Luckily, Rosie's playlist is boosting my spirits this evening.

Recently I've been spending a lot of time on the bus and have lost my cycling enthusiasm. This won't do. On the plus side, it gives me some time to read a good book or two.

It's not so great when you get to a sad part though. Weeping on the bus is not a good look. 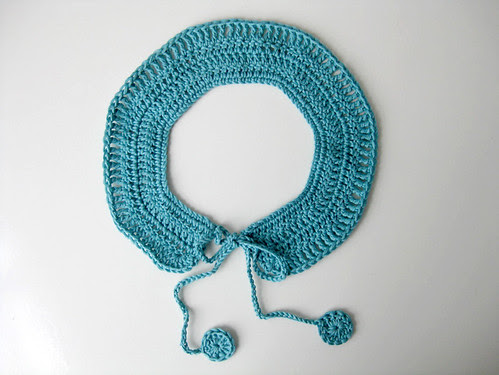 I bought a nice jumper with a peter pan collar a couple of weeks ago, and then decided that a lot of my jumpers would look nice with the addition of a collar, so have been making these crochet collars to liven up my wardrobe.

The pattern is by Shara Lambeth and was very straight-forward and easy to follow. I tried making the collar in a few different weights of yarn and I think the most successful was the double knit collar (as the pattern recommends) - although I think the aran weight one (in cream) would lend itself well to a thick winter jumper. 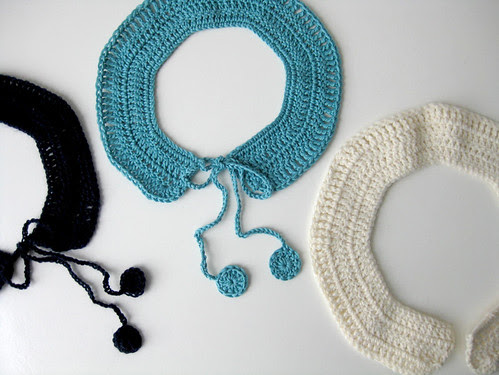 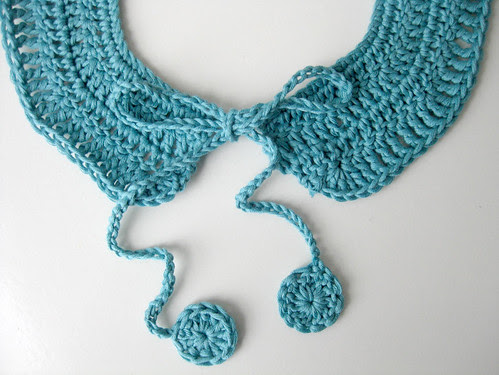 A nice addition to any jumper... 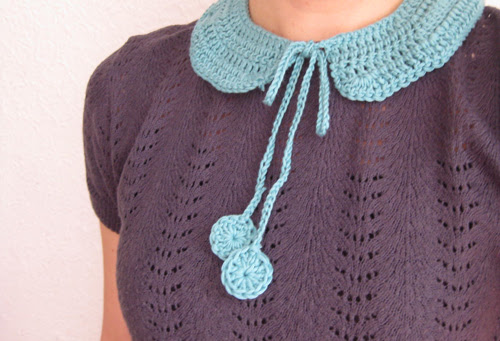 I've been pretty unsuccessful at getting much done lately. The arctic temperatures are leading me to spend a large number of my evenings either huddling under blankets or escaping to the warmth of a local pub, or even the swimming pool.

I'm going to take inspiration from Lucy though and try and set myself a making challenge. For every evening I spend at home I will try and make/draw/cook/start/finish something new. No more getting into bed early to keep warm. Active fingers = warm fingers.

In other news, it was a big shame to hear about Whitney Houston. This one is a favourite.