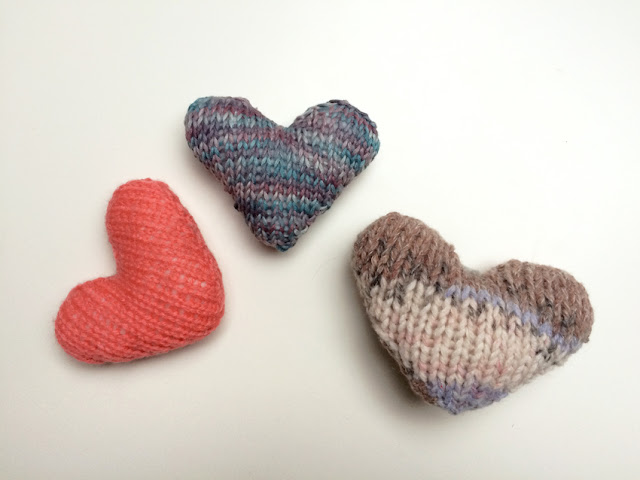 As Valentines day is almost upon us I thought I'd share a favourite knitting project of mine - these knitted hearts make perfect gifts for loved ones on Valentines Day, or any day!

It's also a super quick knit - I made one yesterday using some of my hand dyed yarn and it was done within the hour.

I've shared the pattern below if you'd like to try one out. 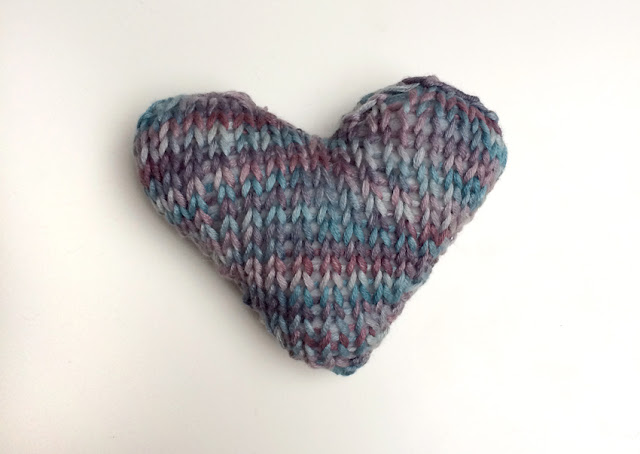 Yarn and needles
I recommend DK wool and side 8 (4mm) needles as a starting point, but you can experiment different weights and sizes if you want a larger or smaller heart.

Repeat the above 5 rows for the remaining 10 sts on needle.

Finishing up
Weave in loose ends.
Sew up and stuff.

Now leave them on pillows, hide them around the house or tuck them in coat pockets - they'll be a nice little surprise for whoever you choose to make one for.

Here's the second set of photos from my house number series over on Instagram. 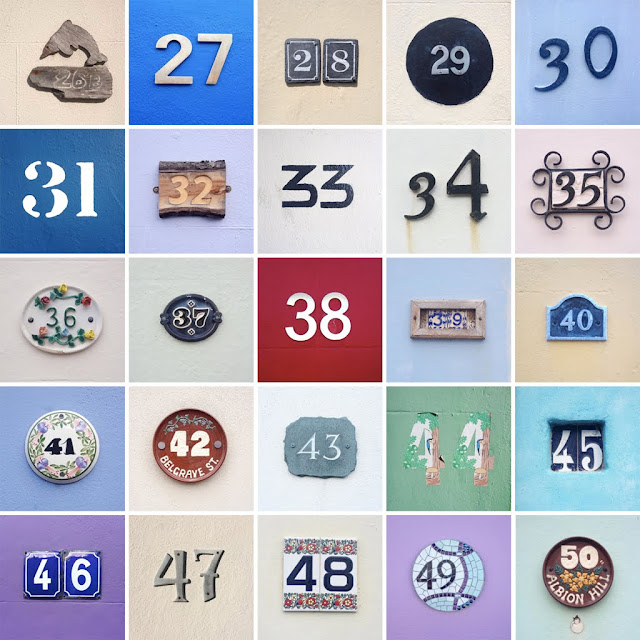 I'm still enjoying the amount of variety - they are all pretty unique, especially alongside the colourful walls of the houses. 45 is a particular favourite - I love how it's embedded in the wall.

The regularity of my posts has definitely slowed down due to the shorter daylight hours and the change in my daily commute, but I expect it will pick up in the summer, and maybe I will be able to reach 100 around a year after I started (in July).

Our cooking challenge is off to a strong start this year - with both of us making our stuffed breads in the first week of January. Last year we had four different cook-offs: dips, tart tatin, gnocchi and jam & scones. Let's see if we can better that this year!

I think this one was a good challenge - neither of us have done much bread-making before so it was a bit of a skill test - but also a creative one in terms of deciding on a filling and shaping the bread.

I made a couple of Mediterranean style pesto and sundried tomato mini plaited loaves, and my mum went made a giant plaited bread ring with a Moroccan filling: olives, goats cheese and a spicy onion mixture. Sounds tasty to me. 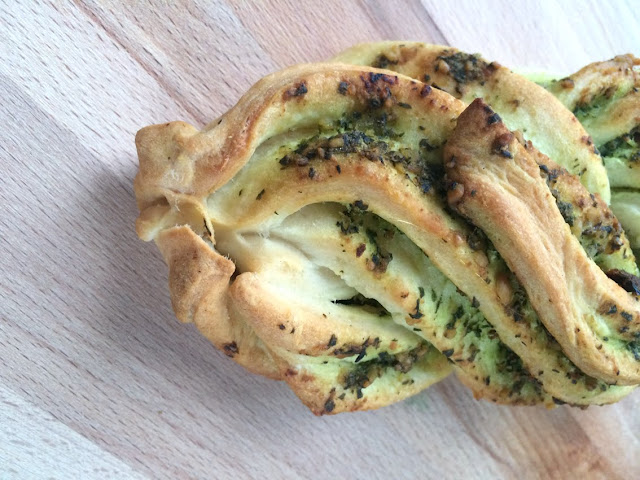 I used this great recipe from Mediterranealicious as a basis for my bread but made my own pesto for the filling and added some sundried tomatoes. The pesto was super quick. Here's the recipe if you want to try it out.

Put all the ingredients in a food processor and mix.

Season with salt and pepper to taste. 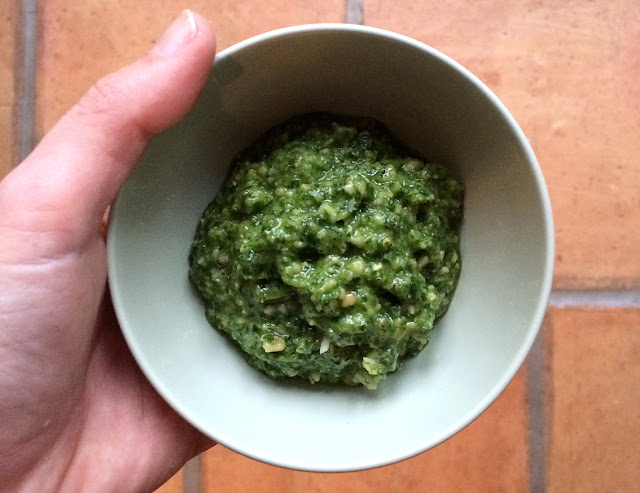 The recipe above makes enough pesto for the bread, with some left over to use another day (we had it with linguine the following day and it was delicious!)

When it came to making the bread I ran into a bit of difficulty as the dried yeast I had in the cupboard had expired I think - I tried twice and it just would not activate, and my first two batches of dough refused to rise.

I went out and bought some instant yeast sachets though and that did the trick. I left the dough for an hour in a warm place and it rose enough that I was sure the yeast was doing it's job. From the sound of it, my mum's yeast was super active as she said her dough kept growing and growing!

Once the dough and the pesto were ready I rolled out the bread mixture into an A3 sized piece, covered with the pesto and some chopped sundried tomatoes, then rolled it lengthways to create a long tube. I strayed from the recipe instructions here and chopped my rolled up dough in half to make two smaller loaves.

The fun bit was cutting the rolled dough in half lengthways to reveal the filling, then twisting the two halves around each other to make the plait.

I thought it might untwist itself as it baked in the oven, but luckily it came out looking the same shape as when it went in. I really like the outcome here - the shape is really nice and the fact that there is so much filling on display makes it look pretty tempting. 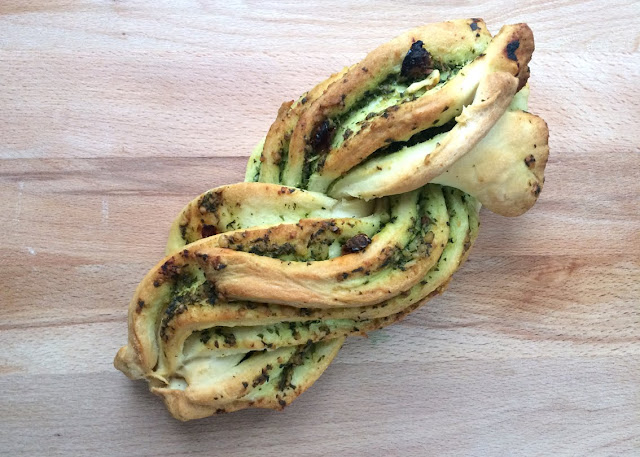 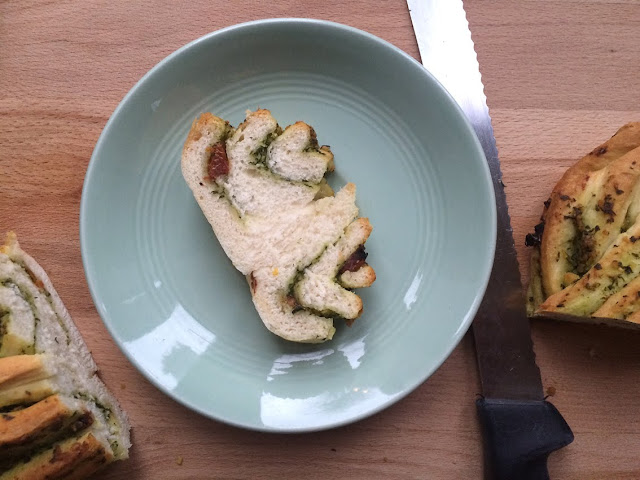 My mum said she got on quite well with her recipe too - which was from a Bake Off book. I think she was a bit suprised by how big it turned out, but it looks like a successful bit of baking, and the flavours sound great!

We both ended up eating the bread warm from the oven with some baked Camembert (great minds!) Judging by the picture my mum and brother enjoyed theirs over a game of Scrabble. 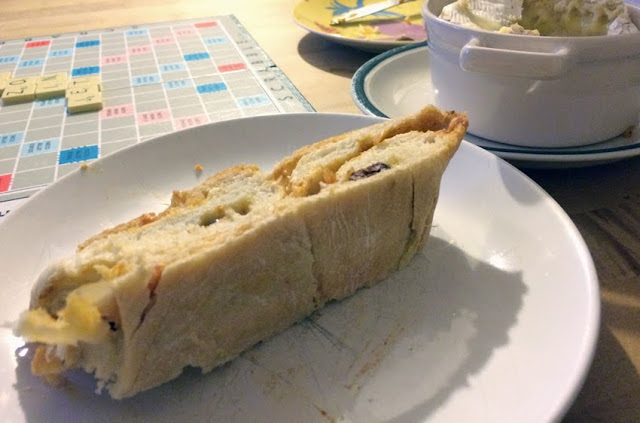 It's lucky my mum had my brother there as a judge as my dad had two bites and decided he didn't like the flavours (typical!) My mum scored a generous 9/10 from Tim though, with the score being bumped up to 10 because it was served with cheese.

Ben also gave me a very generous mark of 10. I'm wondering now if this is possibly partially due to the cheese too? Either way it was a great result all round - full marks for us both!

Maybe one of the most successful cooking challenges to date?

Next time we'll be making Bakewell tarts.
I think I might do an iced one. Yummy.

Happy new year! I hope you've all enjoyed the festive period and best wishes for 2016!

Yet again, I was a bit under the weather over Christmas which left me feeling a bit unenthusiastic about everything. But I'm feeling much better now and in a positive frame of mind about the year just gone and the year ahead.

2015 was a great year: Ben & I moved into our first home together - we cooked, we gardened, we holidayed and we adopted a cat! Below are some of my personal favourites from Instagram which sum up the past year... 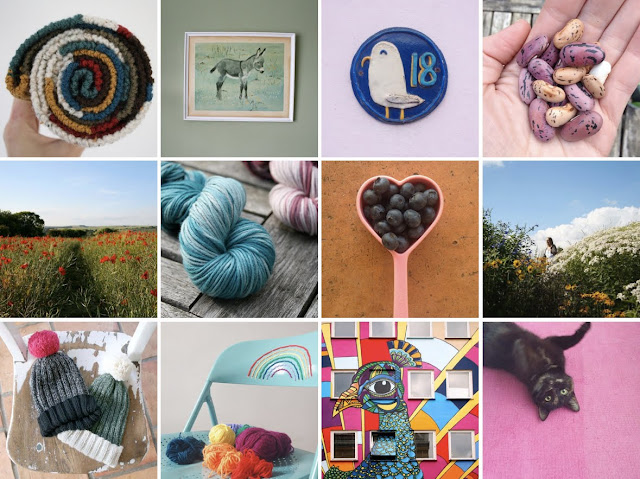 And now to 2016. I didn't really make any resolutions last year, but I've got a few in mind for this year. Hopefully all very achievable....

Be nicer - be kind
I think it's always good to keep this as a conscious thought - to help be more generous and selfless.

Connect more with friends and family
I've really loved spending time in our new house, so I spent a lot of time at home in 2015. That in itself is no bad thing, but I want to make the effort to keep in touch and see friends and family more often this year.

Reply to messages and emails sooner
This is one that has come up in my new years resolutions before. I often find myself receiving a message or an email and thinking "I'll respond to that when I have a moment to reply properly." Then it slips my mind and I don't reply for ages. I must do better!

Go on the London Eye
It's been there 16 years now and I must be one of the only people not to go on it! This year is the year.

Eat a pickled egg
Always good to have an eating challenge to tick off the list. I think Ben's going to try jellied eels!

Draw more
No specific challenge here. Just to try and find the time to draw a bit more often.

And that's it!
Good luck with your resolutions if you have any, and have a brilliant year!
posted by d e b b i e at 10:45 am 4 comments: