We managed to do six cooking challenges in 2017, and our fifth was carrot cake.


It's great that we've had more participants this past year and we had three entries again for this one; me, my mum and Audrey (photos above in the same order). Unfortunately I don't have that many photos of this challenge, which is often the way in the autumn and winter, when it's dark outside.

Audrey made her cake first, and actually made two different versions, both as birthday cakes for Ben's dad, John. One had cooked and pureed carrots mixed with walnuts and coconuts and the other had raw grated carrots with sultanas and orange zest. She took them along to their Ramblers meeting and said she got some favourable comments! Her only slight disappointment was that the cream cheese frosting went a bit runny out of the fridge.

My mum went next, and used a Mary Berry recipe. She said it was nice and moist, which she thought was probably because the recipe used oil rather than butter in the mixture. She also went for a cream cheese icing, topped with walnuts, which she said was really delicious.

Also, look at this artistic photo she sent through for me to use... bonus points deserved maybe? 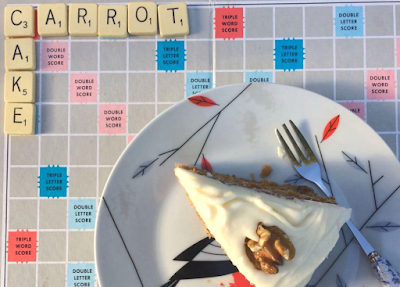 I was a bit slow off the mark this time and actually had to have two attempts at my cake. I used the same recipe both times, from this 'Easy Vegan' book my mum shared with me. On my first attempt I think I took it out of the oven a bit too soon, so it was beyond moist and more like a soft sponge pudding than a cake (better with a spoon than fingers).

Ben actually really liked my first attempt, but I don't think it was quite cakey enough, so I didn't bother icing it and decided to try again.

My second attempt had a much better consistency and was more cake-like, although still nice and moist. I decorated it with a lemony non-dairy butter frosting and chopped pistachios, which was delicious but very sweet. I'm actually not normally a big fan of carrot cake or the cream cheese frosting and it wouldn't be my cake of choice but I did enjoy this one, although perhaps one slice was enough for me. 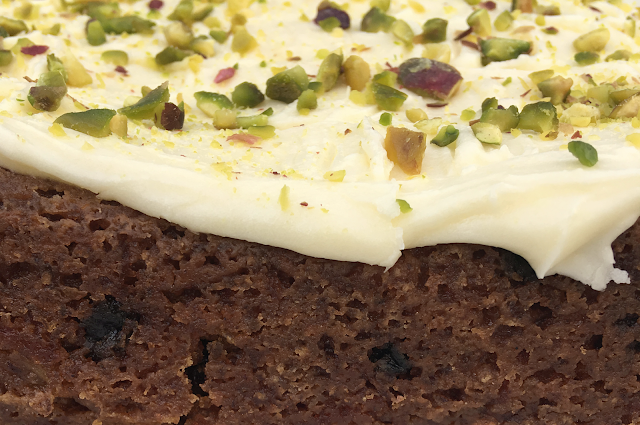 The scores awarded were as follows...

What a successful challenge! I feel like we've had a pretty good run of them this year.

Our final challenge of 2017 was festive themed and we decided to do mince pies this year, with a combined judging held on Christmas Day.

Wow! its yummy yummy cake. I love it. I am very happy to see its recipe. Now, I can try this cake at my home. Thank you so much for sharing. I'll be wait for your next recipe.